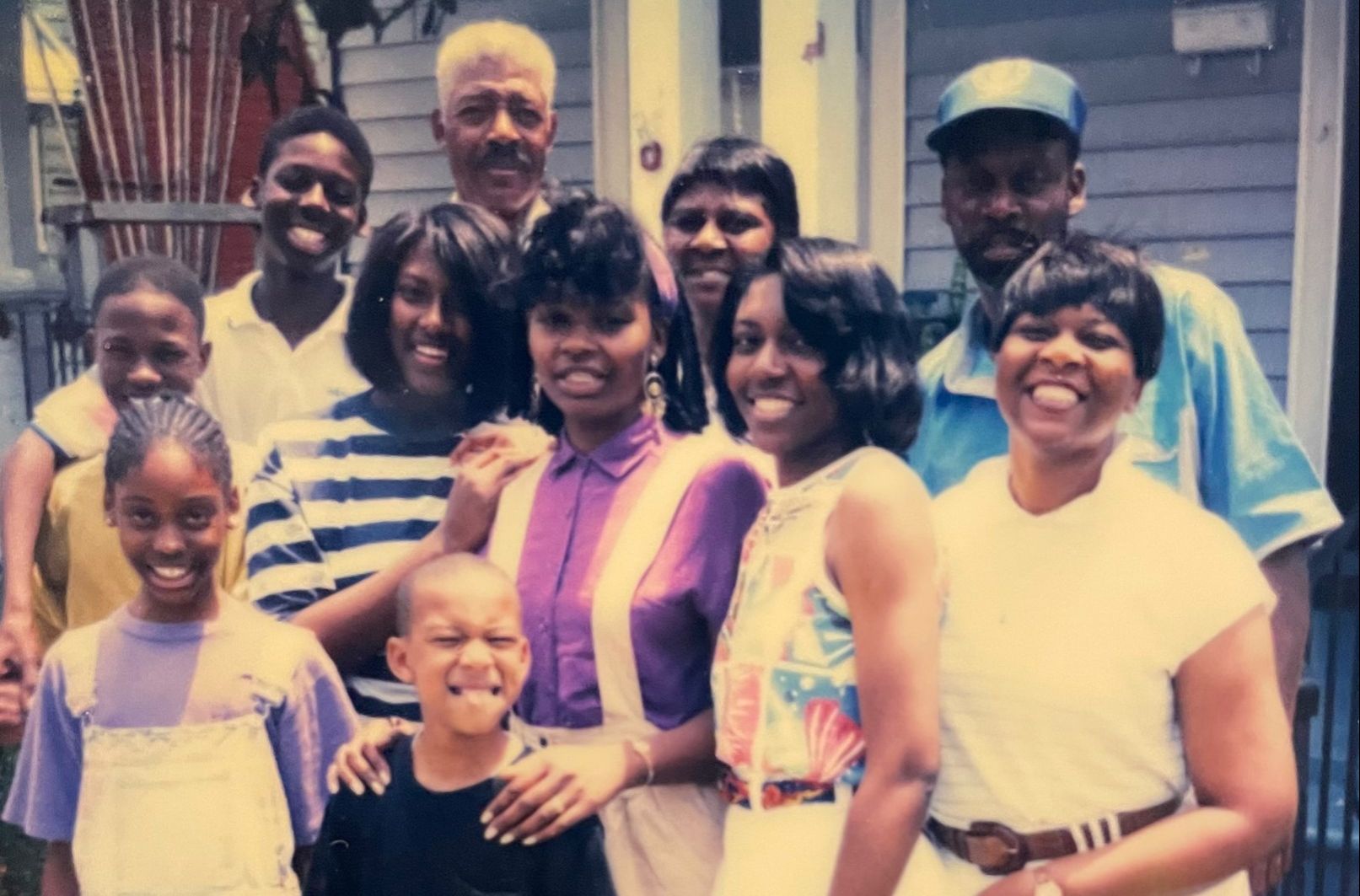 I am my mother’s daughter.

Check out that vibrant family photo up there. You see that little girl with the braids who bears a resemblance to Umbrae from Jordan Peele’s “Us”? That’s me.

Now, see the pretty lady in the middle with the fluffy bangs in the grown-up version of the same purple top and overalls that I’m wearing? That’s my mom! We were twinning that day. That’s how we used to roll.

As a small child, one of my favorite playtime activities was running into her closet, closing the door, and playing dress-up with her jewelry and clothes for hours. I went through every single item. She’d stop in to grab something or to check on me, then happily leave me alone in fantasy land.

I used to be my mom’s shadow. Wherever she was, I wanted to be. I wanted to do whatever she did. I believed what she believed. When things were rough between her and my dad (which was all the time), we saw her as the solid rock we could depend on for unending love, affection, positivity, and support.

I never imagined that a day would come when our relationship would feel rocky. I thought the distance I felt between me and my dad would always be there. Yet, by some strange twist of fate, he’s become the dynamic character whose self-reflection and growth has led to stronger family ties. She has remained steadfast and static, and she and I have never been further apart.

There’s nothing like lying in bed with the flu hacking up half your chest and having a seething fundamentalist Christian hover over you like a carnivore cornering an injured deer. Such a person is always waiting for the chance to find you at your lowest and use your condition as proof of your sinful state.

“I-I know you don’t wanna hear this, Joy, but all of this is just the Lord trying to draw you back to Himself.”

After experiencing the death of my friend Jeff and my grandmother, the latest toxic relationship and breakup, and a year full of overwhelming responsibilities, I was finally wrestled to the mat by a bad case of influenza a few weeks ago. With these words, my mom moved in for the kill, in the same manner which she has approached me with bible in hand and tone-deaf zeal in heart for several years now.

I cannot, for the life of me, understand how or why someone can believe that badgering a person with an idea will make it attractive enough for that person to accept. Yet, this is mom’s number one strategy for attempting to usurp my humanity and free will with her beliefs. God love her! It only strengthens my resolve to push back, to be unapologetically me.

I had hoped that living together over the last few years would have drawn us closer, but I’m afraid it just left a bad taste in her mouth. See, a few years ago, my mom felt a strong draw to move from her home down south further north to be with us. The children were on the cusp of tweenhood. She lived alone, was nearing retirement, and wanted to spend more quality time with her grandkids before they were no longer kids.

The timing could not have been better. I had just made the decision to end my marriage, and mom and I decided to pool our resources and get a place together. She was able to cut her work hours in half, and I was able to work while she helped look after the kids.

I always admired those strong family ties that the Indian and Latinx families in the neighborhood seem to have, where there’s always at least one grandparent in the home, anchoring everyone in wisdom and love. I consider that kind of thing essential—something more of us need to get back to.

It was wonderful. However, I knew this bliss would be short-lived, because the man my mother married years before—a convict serving a 45-year sentence—would be released from prison just a few years after we moved in together. And this would completely upend our family dynamic.

It’s a dynamic that had already changed drastically when I consciously deconverted from organized religion. I kept that a secret from my mom for nearly a decade, because I knew she’d never see me the same way again.

There’s something funny about the way devout Christians express their love. It’s a “love” that cares nothing for your humanity, because their faith teaches them that humanity in itself is worthless.

It’s a “love” that refuses to respect your boundaries, because their faith tells them that you don’t deserve respect. It tells them that their mission to convert unbelievers is paramount to any objections you could levy. Your objections are simply evidence of the devil’s hold on you.

So, during our time under the same roof, she’d go into my room searching for evidence of my wayward lifestyle. I’d leave my condoms or a whip in plain view, hoping she’d get fed up enough to stop. She’d catch me on my days off for a passing lecture.

When she realized I was dating, I had my boyfriend install a new locking doorknob so she couldn’t just burst into my room whenever she felt like it. She even went so far as to go to my co-parent’s house behind my back and pray with him, because “the Lord told” her that He wanted us back together.

The Lord had apparently neglected to send me the memo.

My life of sin and my children’s lack of enthusiasm for church and the things of God, apparently sent her further into her shell. It got to the point that she no longer ate meals with us, and she’d spend up to ten hours a day in her room praying, fasting, reading her bible, and watching religious programming.

In every conversation or bit of small talk we shared, I could feel her fishing for an opportunity to shove in a scripture, a quote from the latest hour of conservative news programming, and the sledgehammer of I told you so’s. The beauty of art or nature, business, travel, love, life, and the hope of fun adventures be damned! There was nearly nothing else that she ever seemed to want to talk about.

I was concerned about depression. She doesn’t believe in therapy. I called a family meeting with my brother and another family member who’s a pastor. I thought, if she didn’t respect our opinion, she might at least consider his. We were wrong. I think it just made her feel more alienated, and I see now how hypocritical such an intervention was.

She finally explained to me that she spent so much time alone because she knows that Jesus is soon to come. He could crack the sky any day now, and she doesn’t want to be found doing anything that will displease him. That was her story, anyway.

When she broke down and cried within earshot of the kids over a water bill and exclaimed how much she hated this new state to which she had never fully adapted, I realized how much she no longer wanted to be here. After 16 years of waiting for her husband’s release, she just wanted to be with him, and I had to release her.

Visitations will have to be planned with care. The kids will no longer be able to spend the night with her once her beloved is home, and mom will be dividing future holidays between us and him.

This is the kind of thing people are supposed to keep private, and I’m always conflicted over sharing in a public forum. However, these last 16 years have taught me just how lonely this path can be for families like mine. My life is like a friggin’ Dateline special, and there are no support groups (from what I can tell) for the families of women who marry convicts.

There are programs for people leaving prison and re-entering society. There are supports for their spouses to help them understand the criminal justice system and to help these couples navigate the world. There is absolutely nothing for the family members who never had a say in the changing dynamic, have no clue whether this new dynamic will be a safe one, and are forced to stand by and watch whatever unfolds in silence. I tell my story because someone else out there is silently holding their breath.

In the same way that I wish for her to respect my choices, my sovereignty, and my boundaries, she hopes that we will all accept her choice of a love and her new life.

I’m learning to love and be loved by my mother in a new way, in a patient way that leaves room to assume only the best of intentions. I’ll try not to judge too harshly, because I certainly require mercy at times myself. But I’ll stand my ground, being true to myself. I’m really no good to anyone else living a lie, anyway.

What do you think? Cancel reply